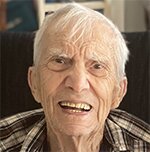 Gordon was born in Melfort, April 28, 1934, to Mervyn and Ada (Sproule), and baby brother to Bill and Bob. He went to school in Beatty and was of the generation that walked to school uphill both ways. A memory of his is walking over telephone poles one winter. He liked playing ball and had a reputation for breaking windows at the school. He attended many community events and always talked about the sports days, bike races, and Christmas concerts held at the old Beatty Hall. He became part of the famous Beatty race car 101. Gordon farmed first with his father and then joined his brother Bob until 1978, when he continued to farm on his own. Once a farmer, always a farmer as we took our last crop check on Sunday prior to his passing. Gordon married Ferne Bohn on July 15, 1960, and to this union three children were born: Pat, Mervyn, and Cindy. In 1968 the house on the farm burned down and they settled into Melfort. Gordon was an incredible family man, always involved in all of his children's activities including hockey, ball, broomball, and camping at least once a summer when we were kids. This involvement carried on with all of his grandchildren. Community was very important to him. He hardly missed a Mustang game, community event, or fall supper. He believed in volunteering and was either a leader, coach, or active board member in many organizations including Melfort Minor Hockey, Melfort Ag Society, Melfort Elks, and Melfort Seniors Club. When the kids left home, he found ways to keep himself busy through bowling, curling, fishing, sledding, and attending major sporting events with his buddy Dale Opdahl. Every good story always started with Gordon and Dale. After Ferne passed away, Gordon moved into senior housing an enjoyed many a coffee meeting, puzzles, and of course a good card game (or many)! Gordon passed peacefully with his family by his side, always loved, always remembered. Gordon is survived by: His children: Pat (Karen), Mervyn (Cathy), and Cindy His Grandchildren: Dana (Jessica), Amy (Luke) Serviss, Scott (Paige), Logan, Kenya, Montana (Chantal), and Mackenzie. His Great Grandchildren: Lance, Lincoln Serviss, Naven, Kai, Isaac, Embree. In-laws: Murray (Kathleen) Bohn, Myrna (Charles) Lees, Marie Warner, and “Our” Aunt Terry And many nieces, nephews, family, and friends. Gordon was Predeceased by: His wife Ferne; his parents Mervyn and Ada; his father and mother-in-law Walter and Florence Bohn; his brothers Bill and Bob; his sister-in-law Joyce; and niece Sherka. Memorial contributions in memory of Gordon may be directed to the Melfort Seniors Hall, Melfort, Sask. S0E 1A0